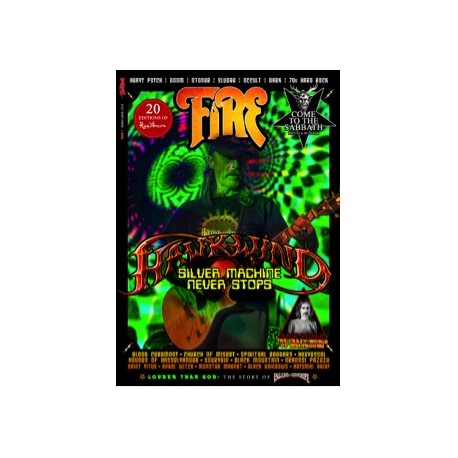 This product is no longer in stock

In the last few years we have seen a resurgence of classic rock and heavy psych. Throughout the new millennium there has been a steady growth in the attention given to this kind of music. Labels started to sign a lot of bands and we noticed an increasing number of labels dedicated to stoner rock, doom, heavy psych, sludge, occult, drone, ambient, space rock and other related subgenres. It seems that the past is the new future. People again dig the values of the 70s and that certain kind of attitude, they like people who can play their instruments, but they also love the spirit, the vibe, the analog recordings, the vintage gear, even the look and the outfits on stage because this is an honest and genuine way to make music. A lot of dedicated festivals take place these days. It all started with Roadburn in 1999, but now we also have Desertfest in Berlin, London and Belgium, Freak Valley, Up In Smoke, Keep It Low, Hammer Of Doom, just to name the most popular. Especially in Europe where we have festivals in almost every country. We are not a big crowd, but very loyal and dedicated and we like it that way, a small but relevant circle of fans, labels, promoters. There’s a big buzz around heavy psych. People are watching old videos on the internet and this gave new life to some old stalwarts of the genre and the reunion thing started to increase. New bands mix with old ones and go hand in hand for the love of this music.

In many hard and heavy magazines we see big bands getting big features, great coverage and long articles. On the other hand we see less written about underground bands. So we want to reverse this process. In this magazine we don’t want to cover the usual big names that occupy the spotlight in the glossy, more popular publications. Big bands don’t need further exposure. Their fans know who they are and what they represent for the world of hard and heavy. Instead we want to put in the forefront those very good, valuable bands that don’t have wider recognition, at least so far. We want to discuss their music at length in these pages. We want to show a big picture of them, we want to show that they deserve more attention not only from all the dedicated fans, but also from a larger audience. These bands work as hard as everyone else, they spend time recording, rehearsing and touring exactly like the big bands, but in a less comfortable way. In other words we like to praise and give a boost to promising, new, rising bands and also to veterans of the scene still struggling on the circuit.

Our aim with this magazine, that will be bi-monthly, is to create a fine product, a place where fans can find what they like the most. We decided not to go on the internet because we like collectable items, like vinyls in the good old days. We like printed magazines because we come from that kind of world. We love to hold a well- designed magazine in our hands. So we have decided to follow the underground trend that is becoming popular in music. As we don’t favor cds or mp3s, at the same time we worship vinyls, limited editions, with creative packaging. This is the reason why we have decided to craft a well-packaged, well-presented, full color magazine, with a lot of regular features and in depth surveys, not only interviews and reviews. We want to have the same appeal, the same dignity and the same stunning look as a big magazine, but with a fanzine spirit. We chose the name Fire due to its multiple meanings. Fire is energy, fire is purification, fire is the flame of psychedelia, fire is the fuel of rock’n’roll, fire is the spirit that Jimi Hendrix gave his guitar and last but not least Fire is the masterpiece by Arthur Brown, a real pioneer and a godfather of our musical genre. We hope you enjoy this magazine as much as we enjoyed compiling it. We won’t sell it through regular kiosks and newspaper stalls. We want to sell and distribute it on our site and through dedicated distributors and mail orders. We haven’t created a mass product, but a real gem for true lovers of heavy psych.

No customer reviews for the moment.